Back then, Supertramp’s future keyboard player, Rick Davies, was a member of The Joint. They were backed financially by Stanley ‘Sam’ August Miesegaes, a Dutch millionaire. By 1969, Stanley realised that The Joint weren’t going anywhere. However, one member of The Joint stood out, keyboardist Rick Davies. So, Stanley offered Rick the chance to form a new band, with his financial backing. Rick agreed, and soon, Daddy were formed.

With Stanley’s financial backing in place, Swindon born Rick Davies began putting together his new band. The way to do this, back in the sixties, was by putting an advert in one of the music papers. Rick chose the Melody Maker. Among the replies Rick received, were from bassist and vocalist Roger Hodgson, guitarist Richard Palmer and percussionist Keith Baker. Along with Rick they became Daddy. However, there would soon be a change in Daddy’s lineup.

Almost straight away, Keith Baker was replaced by former actor, Robert Millar. Although the group was in its infancy, they were already onto their second lineup. This new lineup of Daddy headed to Kent to hone their sound.

Straight away, the nascent group began honing their sound. They headed to a country house in West Hythe, Kent. That’s where Daddy began honing their sound. However, as the rehearsals drew to a close, it became apparent that Daddy didn’t have an extensive setlist. They only knew four songs. Two of these were cover versions and the other two were originals, penned guitarist Richard Palmer. He quickly emerged as Daddy’s songwriter in chief, as the grouped headed out on tour.

Daddy’s destination was Cologne, where they would play a series of concerts at the city’s P. N. Club. This allowed Daddy to further hone their sound. When Daddy returned home, they were a better band. There was however, a problem with their name though.

When Daddy were formed, Rick and the other members thought they were the only band with this name. That proved not to be the case. There was another band called Daddy Longlegs. This could lead to confusion. So, inspired by William Henry-Davis’ The Autobiography Of A Super-Tramp, Daddy became Supertramp. Little did anyone realise it, but one of the most successful groups of the seventies and eighties had just been born.

By 1970, Supertramp had signed to the British subsidiary of A&M Records. They were one of the first groups to sign to A&M UK. Supertramp would also become one of A&M UK’s most successful signings. Their debut album was Supertramp.

At at Morgan Studios, the four members of Supertramp began work on their eponymous debut album. Although Supertramp was the group’s debut album, they were confident enough to produce it themselves. Rick sang lead vocal on six tracks. On Nothing to Show and Shadow Song, Rick shared the lead vocal with Roger. Then on Maybe I’m a Beggar and Try Again Roger and Richard shared lead vocal duties. Once the ten tracks were recorded during June 1970, Supertramp was released in July 1970.

On its release in July 1970, the reviews of Supertramp were mostly positive. Some critics spotted Supertramp’s potential. The music was described as melodic prog rock. Despite this, Supertramp was a commercial failure. This resulted in Supertramp rethinking their sound and direction.

For their sophomore album Indelibly Stamped, Supertramp decided to change direction. They moved away from the prog rock of their debut album, to a much more traditional rock sound on Indelibly Stamped. This however, wasn’t the only change.

On the release of Indelibly Stamped, in June 1971, most critics praised Supertramp’s sophomore album. Just like their eponymous debut album, it received positive reviews. However, the only thing critics didn’t like were the lengthy instrumental parts. This to many critics weaned on the three minute pop song, was self-indulgent. However, music was changing, and Supertramp would be at the forefront of this change. The problem was, Supertramp were ahead of the musical curve.

On its release, Indelibly Stamped failed commercially. Their day was about to come though. That would be in 1974, when Supertramp released their third album, Crime Of The Century.

Crime Of The Century.

After the commercial failure of Indelibly Stamped, the group became disillusioned. Kevin Currie, Dave Winthrop and Frank Farrell left Supertramp. The last men standing were Rick Davies and Roger Hodgson. They began looking for the next lineup of Supertramp.

The new lineup of Supertramp featured bassist Dougie Thompson, drummer and percussionist Bob C. Benberg and John Helliwell, who played saxophone, woodwinds and keyboards. This was the lineup that recorded Crime Of The Century.

Despite their relationship faltering somewhat, the eight songs were credited to Rick Davies and Roger Hodgson. This wasn’t the case. Some tracks were written by Rick, others by Roger. However, Rick Davies and Roger Hodgson hadn’t managed to dissolve their songwriting partnership. This would be a lengthy and complicated process. Ironically, this would prove profitable for either Rick or Roger when Crime Of The Century was eventually recorded

Recording of Crime Of The Century took place at Ramport Studios, Scorpio Sound Studios and Trident Studios in London between February and June 1974. Supertramp and Ken Scott co-produced Crime Of The Century. As the sessions began in February 1974, Supertramp’s rhythm section featured Bob Siebenberg played drums and percussion, Dougie Thompson bass and Roger Hodgson vocals, guitar and piano. They were joined by Rick Davies on keyboards, harmonica and vocals, while John Helliwell played saxophone and clarinet. After four months recording, Crime Of The Century was completed in June 1974. It would be their breakthrough album.

Dreamer was chosen as the lead single from Crime Of The Century. It reached number thirteen in Britain, giving Supertramp their first British hit single. Bloody Well Right, the followup to Dreamer, reached number thirty-five in the US Billboard 100 charts, giving Supertramp their first American hit single. For the new lineup of Supertramp, Crime Of The Century, which I’ll tell you about, was a game-changer.

School opens Crime Of The Century. A haunting, lingering bluesy harmonica adds a melancholy sound. It floats above the arrangement as gradually, it unfolds. When the vocal enters, its heartfelt and tender. Meanwhile, keyboards and meandering guitars create an understated backdrop. Soon,  the arrangement opens out and Supertramp spread their their wings. The new rhythm section join keyboards, percussion and searing guitars in creating an arrangement that veers between dramatic, understated and melancholy. During an instrumental breakdown, Supertramp take the opportunity to showcase their considerable skills, before this melodic, melancholy track reaches a dramatic crescendo.

Bloody Well Right was the second single release from Crime Of The Century. Keyboards create a jazz-tinged backdrop, while occasionally, the rhythm section interject. A wah-wah guitar climbs above the arrangement. It’s joined by keyboards and a blistering, rocky guitar. This sets the scene for Rick’s grizzled vocal. When it drops out, searing guitars and a braying horn enter. Later, their joined by Ray’s vocal. He sings call and response with the rest of Supertramp. The sultriest of saxophones proves the perfect addition to what’s one of Supertramp’s most memorable singles.

Just like many of the tracks on Crime Of The Century, Hide In Your Shell deals with the theme of loneliness and mental stability. They’re threads that run through Crime Of The Century. This makes Hide In Your Shell a soul baring track. When Roger delivers the lyrics, it’s as if he’s experienced the loneliness that he’s singing about. Behind him, Supertramp are at their melodic best. With the rhythm section providing the heartbeat, keyboards and a rasping horn combine. They’re the perfect accompaniment to Roger’s soul baring vocal.

Asylum is a song about a someone with mental health problems. They, however, don’t realise they’re ill. Pleadingly, he sings “don’t have me sent to some asylum.”Meanwhile, the arrangement builds and grows. From just keyboards, the drama builds. This frame the vocals, as it breathes, life and meaning and emotion into what are insightful, thoughtful lyrics.

Dreamer wasn’t a new song when it featured on Crime Of The Century. Roger penned the track when he was just nineteen. He wrote the song on a Wurlitzer piano, and shares the vocal with Rick. An urgent piano line accompanies the jaunty vocal. It’s accompanied by harmonies. Soon, instruments flit in and out of the track. The rhythm section, percussion and stabs of keyboards join ethereal, dreamy, then urgent harmonies. These urgent harmonies signal a change in direction. After that, the track becomes dramatic and urgent. In doing so, a Supertramp classic takes shape.

Rudy is another track where Supertramp throw a series of curveballs. Just a lone piano adds a wistful backdrop, before flourishes of piano set the scene for the vocal. It’s similarly understated, in a singer-songwriter style. Think Billy Joel. Then it becomes powerful and hopeful. Meanwhile, Supertramp unleash their trademark brand of art rock behind this vocal powerhouse. Stabs of piano, crystalline guitars and a sultry heartachingly beautiful saxophone combine with the rhythm section. Together with the vocal they create a mixture of drama, beauty and melancholy.

If Everyone Was Listening is another piano lead track. This time, Roger takes charge of the lead vocal. His tender, wistful vocal is perfectly suited to the track. He delivers the lyrics as if he’s lived them. Accompanying him are the rhythm section, piano and harmonies. They create the backdrop to his needy, hopeful vocal as he sings “oh please no, don’t let the curtain fall.”Swathes of lush strings sweep and are augmented by a clarinet and crate a quite beautiful, melancholy mini-masterpiece.

Crime Of The Century closes with the title-track. This time, Rick delivers the vocal. His vocal has a much tougher, powerful sound. It veers between a roar to understated. Behind him, stabs of piano, searing guitars and deliberate drums combine adding a dramatic backdrop. Gradually, the song unfolds, revealing its many secrets. Part of the song’s success is down to the swathes of strings. They add to the tension and drama. They’re augmented by the grizzled saxophone as Crime Of The Century, a five minute opus, reveals its considerable delights.

The Supertramp story isn’t one of overnight success. Far from it. It took Supertramp five years, and several lineups to make a breakthrough with Crime Of The Century. This was their third album. Their first two albums had failed commercially. For Supertramp, this was a huge disappointment.

Indeed, so disillusioned were three members of Supertramp, that they left the band after their sophomore album, Indelibly Stamped. For Rick and Roger this proved a blessing in disguise. It gave them the opportunity to start with a new lineup of Supertramp. This new lineup, proved to be the one that brought commercial success and critical acclaim Supertramp’s way.

Throughout the rest of the seventies, Supertramp were rock royalty. They rubbed shoulders with Genesis and Queen. Albums like 1975s Crisis? 1977s What Crisis?, Even in the Quietest Moments… and 1979s Breakfast in America saw Supertramp become one of the most successful bands in the world. This continued right into the eighties, through 1982s …Famous Last Words…, 1985s Brother Where You Bound and 1987 Free as a Bird, which was Supertramp’s last studio album for ten years. The album that started this run of commercial success and critical acclaim was Crime Of The Century, which was recently reissued by A&M Records, as a double album. 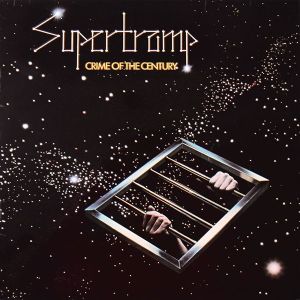