By the time Jethro Tull began work on their eighth album Minstrel In The Gallery, they were one of the biggest selling groups of the seventies. Especially in America. Five of their albums had been certified gold, while 1971s Aqualung was certified triple-platinum. In America alone, Jethro Tull had sold 5.5 million albums by 1974. Jethro Tull were also enjoying a glittering career in Britain and Germany. Aqualung had been certified gold in Germany, and 1974s War Child was certified silver in Britain. For the members of Jethro Tull, this should’ve been one of the happiest time of their lives. It wasn’t though.

For lead singer Ian Anderson, it was a bitter-suite moment. The commercial success and critical acclaim was what every band craved. However, it came at a cost. The more successful Jethro Tull became, the more they had to tour. Soon, they were locked into a schedule of recording an album, then touring it. Eventually, the constant round of touring and recording, took its toll on Ian’s marriage. By April 1975, Ian’s marriage to Jennie Franks had ended in divorce. It wasn’t a good time for the Jethro Tull frontman.

When recording of Minstrel In The Gallery began, in April 1975, Ian Anderson had penned six tracks, and cowrote Minstrel In The Gallery with Martin Barre. These seven tracks were recorded using the Masion Rouge Mobile studio. Ian played flute, acoustic guitar and sang lead vocals. The rest of Jethro Tull included drummer and percussionist Barriemore Barlow, guitarist Martin Barre and bassist Glen Cornick who also played Hammond organ. John Evan played piano and organ. David Palmer took charge of the orchestral arrangements,while Ian Anderson produced Minstrel In The Gallery. It was released in September 1975. Before that, the critics had their say.

Opening Minstrel In The Gallery, is the title-track. It was penned by Ian Anderson and Martin Barre. Here, Jethro Tull transport the listener back to Elizabethan times. They dawn the role of wandering minstrels. Their raison d’être is to entertain the guests in the gallery of the grand hall. As Ian sings, an acoustic guitar accompanies him. A lilting flute and harmonies drift in and out. Then with a flourish of guitar, a blistering electric guitar solo enters. The rest of Jethro Tull cut loose. They’re at their heaviest as the rhythm section, guitars, keyboards and Ian’s flute combine. Later, Ian’s vocal is akin to strut. It’s as if he’s frustrated at being a modern day Minstrel In The Gallery. He vents his frustration and anger. This seems to inspire the rest of Jethro Tull. Together, they play their part in this storming, but melodic opus. Elements of classic rock, English folk, jazz and prog rock combine seamlessly, as Jethro Tull start as they mean to go on.

Jethro Tull draw inspiration from Norse mythology on Cold Wind to Valhalla. In Norse mythology, Valhalla is a majestic hall, ruled over by the God Odin. Half of those who die in combat, travel to Valhalla, led by the Valkyrie. As Ian counts the band in, an acoustic guitar and organ combine. A roll of percussion signals the arrival of Ian’s flute and then Ian’s deliberate, dramatic vocal. Swathes of strings sweep urgently as the story unfolds. Drums and searing, screaming guitars add to the urgency. It’s best described as controlled aggression from Jethro Tull’s rhythm section. Later, as Ian’s vocal drops out, strings sweep dramatically, a guitar chimes and bursts of flute punctuate the arrangement. By now, it’s a masterclass from Jethro Tull. Things can’t get any better. They do. When Ian’s vocal returns, Jethro Tull are at their tightest. They never miss a beat, and with a flourish, they reach a dramatic crescendo.

As Ian’s flute flutters above the arrangement to Black Satin Dance and a bass probes. Originally, the bass playing was criticised for being rigid. This however, suits the arrangement. Soon, a piano plays and Ian’s heartfelt, needy vocal enters. He seems to have dawned the role of Elizabethan minstrel. Before long, a scorching guitar is straining at the reigns. So are sweeping strings. It’s a hint at what’s about to unfold. Jethro Tull return to their heaviest. As blistering guitars are unleashed, the bass probes and drums pounds. At the breakdown, the arrangement is stripped bare, before becoming frenzied. Ian vamps and plays his flute. After that, Jethro Tull combine controlled power, drama and imagery on this beautiful, cerebral example of prog rock at its finest.

Requiem has a much more understated sound. It reminds me of Pink Floyd. Accompanied by just an acoustic guitar and wistful strings Ian delivers a tender vocal. He delivers lyrics that are both beautiful and thoughtful. In doing so, we hear another side to Jethro Tull. Later, Requiem would remembered as one of the finest ballads Jethro Tull ever recorded.

One White Duck/010 = Nothing At All opens side two also has understated sound. An acoustic guitar and strings play an important part in the arrangement. They accompany Ian’s pensive vocal. So do the rhythm section. They take care not to overpower the rest of arrangement. Instead, they’re content to provide the heartbeat. Meanwhile, Ian’s vocal paints pictures of those he’s left behind; as the wandering minstrel tours the world. Poignantly, he sings: of “postcards on the mantlepiece” and “one white duck on the wall.” That’s reality. Not what he’s doing now. Pizzicato strings signal that a change is coming. As Ian  returns to his other life, he urgently strums his guitar. His vocal is full frustration and confusion. You wonder if it’s what he wants? Ian knows he’s lucky, but isn’t sure this is the life he wants? On this very personal song, one can’t help wonder whether Ian Anderson was at a crossroads in his life.

Every Jethro Tull must have an epic. Minstrel In The Gallery has Baker St. Muse, a song in four parts. On the original album, they were one long track. Not now. Despite Ritalin, a generation’s attention span is shorter. So, Pig-Me and the Whore. Nice Little Tune, Crash Barrier Waltzer and Mother England Reverie become four tracks.

Ironically, Baker St. Muse is much more accessible than some of Jethro Tull’s previous epics. Seamlessly, the four parts become part of what’s a musical Magnus Opus. That’s the case from the opening bars of Pig Me, as Ian paints pictures of London in the seventies, and the sights, smells, sounds and sadness of Baker Street. Ian likens it to a fairground. As he does this, just an acoustic guitar plays. Soon, melancholy strings, a piano and a pounding rhythm section enter. They add an element of drama and a folk-tinged sound. As Ian’s vocal drops out, Jethro Tull stretch their legs. It’s all change. A cascading flute, blistering guitar, bubbling bass and stabs of Hammond organ unite. Joining the rocky arrangement, is Ian’s vocal before the song reaches its crescendo, giving way to Pig-Me and the Whore.

Straight away, Ian sings of Baker Street’s dark underbelly on Pig-Me and the Whore. Before heading home to respectability, the character in the song has an assignation with a hooker. Ian’s vocal is almost judgemental. Strident guitars accompany him. So do the rhythm section and swathes of lush strings. They set the scene for Nice Little Tune.

It’s an instrumental, lasting just over a minute. However, Jethro Tull pack a lot into Nice Little Tune. They jam, building the track up. Various instruments flit in and out. It has an understated, wistful sound, before the arrangement marches along to the beat of the drum. Later, swathes of strings prove the perfect bridge to Crash-Barrier Waltzer.

On Crash-Barrier Waltzer, Ian Anderson’s lyrics have a sense of sadness. They tell of a woman’s fall from grace. She’s: “some only son’s mother…a Baker Street casualty.” With wistful strings for company, Ian tells how he wanted to help her. However, he tells of the intransigent policeman’s response. Oh officer, let me send her to a cheap hotel, I’ll pay the bill and make her well – like hell you bloody will!” There’s a sense of anguish, anger and sadness as thoughtfully, he delivers the lyrics..

Mother England Reverie is the final part in Baker St. Muse. Ian’s been back on Baker Street, observing everyday life. He returns with what’s like a short story put to music. As the arrangement unfolds, it’s understated and melancholy. Just piano and guitars augment the string drenched arrangement. They provide the backdrop for Ian’s vocal. Then after two minutes, the arrangement grows. Flourishes of piano and flute are joined by a powerhouse of a rhythm section. Later, bursts of drums and cascading strings reflect the drama in Ian’s vocal. They play their part in what’s highlight of Baker St. Muse. Everything, it seems has been leading to this moment.

Grace closes Minstrel In The Gallery. It’s thirty-seven seconds of quite beautiful music. Just Ian, his acoustic guitar and lush strings combine. However, you can’t help but wonder whether this could’ve been the start of another Jethro Tull elegiac epic?

Forty years ago, very few critics thought that another generation would be celebrating the release of Minstrel In The Gallery. However, that’s what happened recently.

Chrysalis released Minstrel In The Gallery-40th Anniversary-La Grande Edition. It’s a fitting celebration of what’s now regarded as one of Jethro Tull’s finest albums. Disc one features Steven Wilson stereo mix of Minstrel In The Gallery, while disc two features a live show recorded in Paris, in July 1975. Then there’s two DVD’s of 5.1 DTS and AC3 Dolby Digital mixes. That’s not forgetting the lavish eighty page book. However, back in 1975, very few critics thoughtMinstrel In The Gallery was worthy of a celebration. This poses a question, how did the critics get things so wrong?

With its fusion of art rock, avant-garde, baroque, classical, folk, free jazz, jazz, pop and psychedelia, prog rock was a melting pot of musical influences and genres. Innovative and groundbreaking, it was a move away from the throwaway pop songs that had dominated music. Prog rock was cerebral music. It provided the soundtrack to university campuses on both sides of the Atlantic. However, some critics weren’t impressed by prog rock.

Now, thankfully, the tide has turned, and prog rock is receiving the credit it deserves. Groups like Jethro Tull are being discovered by a new generation of music lovers. They’re no longer willing to be fed a diet of third rate modern music. This includes most of today’s hip hop and dance music. It’s disposable music at its worst. People won’t be listening to it in forty years time. It won’t stand the test of time. Unlike Jethro Tull and albums like Minstrel In The Gallery. 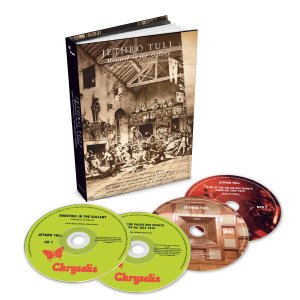