WILLIE HIGHTOWER-OUT OF THE BLUE.

Willie Hightower-Out Of The Blue.

Sadly, nowadays ageism is rife in society and many experienced and talented professionals are consigned to the scrap-heap. Many talented and experienced people are suddenly jettisoned by organisations who should know better. Many of these people are only in their fifties and sixties and have a lot to offer their chosen professions.So does seventy-seven year old soul singer Willie Hightower, a man with an impeccable musical pedigree.

Willie Hightower lives in Muscle Shoals, Alabama, which is the home of Southern Soul,and has enjoyed a long and illustrious career that began in he fifties and has spanned seven decades. Sadly, since the noughties Willie Hightower hasn’t spent much time in the studio although the veteran soul man still puts on  a remarkable show.

That was the case in 2017 when Willie Hightower appeared at Graziano Uliani’s annual Porretta Soul Festival in Italy, where he was backed by the Anthony Paule Soul Orchestra from the San Francisco Bay Area. During each performance, the veteran soul man rolled back the years as he revisited hits like If I Had A Hammer. As Willie Hightower took his final bow, many in the audience thought he was about to head home. Willie Hightower had other plans.

Seventy-six year old Willie Hightower had signed a recording contract with ninety-four year old Memphis producer Quinton Claunch. The pair who had a combined age of 160 were about to turn back time to the sixties, which was a golden age for soul, and especially Southern Soul, when they recorded a new album.

These musicians are creme de la creme of Muscle Shoals musicians, including veteran season players, keyboardist Clayton Ivey and guitarists Travis Wammack and Will McFarlane. They’re joined by a new generation of musicians, while Billy Lawson co-produces Out Of The Blue.

When Willie Hightower completed recording of Out Of The Blue with producer Quinton Claunch. the veteran soul man said the he was:  “really pleased  with his new album. Willie Hightower was just being modest and had recorded an album to be proud of.

This they managed to during relaxed and laid-back sessions where the two men  often quipped their way through the day while laying down the tracks that later became Out Of The Blue. The two veterans were enjoying being back in the studio.  Willie Hightower remarked that: when you get a good bunch [of musicians] together and a couple of guys at the controls who know what they are doing, it’s hard to see anything really going wrong.”

Very little went wrong and Willie Hightower had soon recorded the ten songs that became Out Of The Blue which was recently released by Ace Records.

On Out Of The Blue, Willie Hightower combines country soul, gospel, R&B and Southern Soul. It’s also an album that has been influenced by everyone from  tender gospel-tinged sound of Sam Cooke to Johnnie Taylor. There’s also a freshness to the songs on Out Of The Blue which are the polar opposite to albums of third rate cover versions revisited by lesser names than Willie Hightower.

He opens Out Of The Blue with a heartfelt rendition of I Found You, before an emotional reading of Raining All The Time. This gives way to a tender cover of Rock Me Gently and the soul-baring and soulful Somewhere Dry. Equally beautiful is the Southern Soul of Tired Of Losing  You.

Country soul meets Southern Soul  on You Can’t Love Me (Better Than You’re Lovin’ Me Now), while No Gettin’ Over Me is a classy and heartfelt Southern Soul ballad. The balladry continues on the tender Easy Lovin’ and Everybody Wants My Girl which features a rueful vocal from Willie Hightower He closes  Out Of The Blue with the melodic and memorable Who Who Who. It completes Willie Hightower’’s comeback on Out Of The Blue.

Willie Hightower-Out Of The Blue. 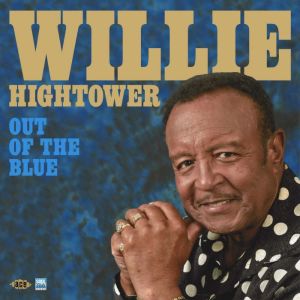