THE LIFE AND TIMES OF VICTOR ASSIS BRASIL

The Life and Times Of Victor Assis Brasil.

They were exposed to an eclectic selection of music. Sometimes, classical music was played, while other days, the young Victor Assis Brasil listened intently as jazz played. All the music that Victor Assis Brasil heard would influence and inspire him later, when he embarked upon a career as a professional musician.

By then, people were starting to take notice of Victor Assis Brasil, and in 1963 made his first recording at a friend’s house. Little did anyone know that history had just been made.

A year later in 1964, nineteen year old Victor Assis Brasil had graduated to sitting in on jam sessions that took place in nightclubs in the South zone.  Most of the musicians were older, and much more experienced, but Victor Assis Brasil didn’t look out-of-place, and sometimes upstaged the veterans he shared the stage this. This didn’t bother them, as they knew that Victor Assis Brasil was a special talent.

They were right, and in 1966 Victor Assis Brasil entered the studio to record his debut album Desenhos. During the sessions, torrential rain fell and it was so bad that the studio ceiling started leaking. Despite that, the sessions continued, and Victor Assis Brasil and his band were reluctant to leave the studio and ended up recording far more songs than was needed for an album. Many of these songs documented a prodigious talent in the early stages of his recording career and would’ve featured on Drawings.

Sadly, the leak in the studio damaged the tapes, and some of the songs were lost for good. Despite that, when Desenhos was released in 1966 it showcased a truly talented twenty-one year old saxophonist and was hailed as the first major jazz album recorded in Brazil. Many critics though Victor Assis Brasil had a long and illustrious career in front of him.

In 1969, Victor Assis Brasil applied and was  granted a place to study at the prestigious  Berklee College of Music, where he played alongside of Dizzy Gillespie, Chick Corea,  Ron Carter and  Clark Terry. This was all part of Victor Assis Brasil’s musical education, and was good experience when resumed his recording career.

During the summer of 1970, Victor Assis Brasil where he planed to record his third album Toca Antonio Carlos Jobim, which featured four tracks that the legendary Brazilian composer, arranger, singer, pianist, and guitarist made famous. This included Tinha De Ser Com Você, Wave, Bonita and Dindi which were recorded by Victor Assis Brasil and became his homage to Antonio Carlos Jobim.

Victor Assis Brasil and his band also recorded Jimmy Heath’s ‘Ginger Bread Boy and three of his own compositions Marilia, Quarenta Graus À Sombra and Ao Amigo Quartin. These four tracks would later become Esperanto and by the end of the session  Victor Assis Brasil had recorded two albums that were released during 1970 including Toca Antonio Carlos Jobim.

Critics on hearing Toca Antonio Carlos Jobim realised that it was game-changer of an album. Gone was the smooth, easy on the ear sound of the Bossa Nova, which was the sound of Brazil’s past.Certainly now that Brazil was no longer a democracy, and after a military coup,  was being ruled by an iron fist by a military dictatorship.

Brazil was country under attack from the enemy within, Many within the country lived in fear, and daren’t speak out in case they were dragged kicked and screaming away by army. Despite the fear that pervaded the country, jazz was still important in the lives of many.

Many critics believed that Victor Assis Brasil was well on his way to becoming one of the biggest names in Brazilian jazz. Especially ager the release of Esperanto later in 1970, which was another landmark album where Victor Assis Brasil and his band seamlessly fused Latin jazz, Música Oopular Brasileira and post bop.

Just a year later, on the ‘14th’ of April 1981, Victor Assis Brasil passed away aged just thirty-five. Brazilian music was in mourning at the loss of one of its most talented and innovate musicals who is just a fifteen year period had released six albums. These albums featured music that was ambitious, innovative and inspirational including  Victor Assis Brasil’s much loved cult classics Esperanto and Toca Antonio Carlos Jobim.

The Life and Times Of Victor Assis Brasil. 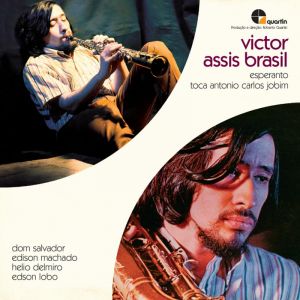