THE LIFE AND TIMES OF SUSANA ESTRADA.

The Life and Times of Susana Estrada.

Ever since 1939, the brutal Francoist regime had ruled Spain with an iron fist. This came to an end with the death of dictator Francisco Franco on ’20th’ November 1975. After Franco’s death, control of Spain passed to King Juan Carlos. By then, Spain was in a state of paralysis. It had been, during the last few months of Franco’s reign. The Spanish people hoped that things were about to change.

They hoped that after the death of Franco, that Spain’s transition to a liberal democratic state could begin. The transition began  on  ’20th’ November 1975 with the passing of Franco, and took nearly seven years until the electoral victory of the socialist PSOE party on the ‘28th’ October 1982. That seven-year period  is nowadays remembered in Spain as the ‘transition’, and marked a new beginning for the Spanish people.

During the transition and sexual revolution, singer, model and actress and Susana Estrada represented the new Spain. She was independent and modern women, who lived her life on her terms.  Susana Estrada wanted to bring about change, and was an advocate for women’s rights, sexual liberation and freedom.  One of the ways she sought to bring about change was through her music. Susana Estrada was much more than a singer, and was at the vanguard of change that took place during the transition in Spain.

Susana Estrada was born in the city of Gijón, in 1949. By then, Franco had ruled Spain since 1936. Growing up, Susana Estrada she watched as the Francoist regime crushed their opponents mercilessly. Many of Franco’s opponents were imprisoned,  others disappeared in mysterious circumstances and  some were murdered. For anyone who grew up in Spain the forties and fifties, life was tough. It certainly was for Susana Estrada.

By the time she was twenty-one, Susana Estrada had been married, had two children and was now divorced. She was left to bring up two children on her own. This she managed to do on the salary she received working as a librarian. However, Susana Estrada had dreams beyond working in a library. What she really wanted to do, was work as a fashion model.

It looked unlikely that Susana Estrada would ever model for magazines like Vogue or luxury clothing brands, she found her own niche within the fashion world. Susana Estrada modelled the ready-made, pret-à-porter fashion lines.  Sometimes, though, she was recruited by overseas model agencies, and occasionally found herself featuring on album cover. By 1971, Susana Estrada had gone up in the world.

Susana Estrada wasn’t most people, and was about to embark on a career as a singer. Her debut single Ya Me Voy De Tu Vida was  released on Odeon in 1978. It was written by Alejandro Jaén, who co-produced the single with Marion Bronley. They were responsible for a single that had been heavily influenced by both classic disco, and the Munich Sound, which was pioneered by Giorgio Moroder. The release of Ya Me Voy De Tu Vida marked the start of a new chapter in Susana Estrada’s career. However, she continued her career in musicals.

Between 1978 and 1980, the musicals that Susana Estrada appeared in grew in popularity. However, they became increasingly explicit. By then, Spain was undergoing a period of transition, and Susana Estrada was campaigning for women’s rights, sexual liberation and freedom. Still, though, some women didn’t approve of what she was doing, and felt it was demeaning. However, Susana Estrada remembers: “I fought very hard for women’s rights. I knew that through sexual liberation you obtain total freedom. This was something which men knew at first and women discovered it late.” Susana Estrada was determined to bring about change, and didn’t seem to care if she caused controversy. Her sophomore single would certainly prove controversial.

Two years after releasing her debut single, Susana Estrada returned in 1980 with her sophomore single Acaríciame, which was released on the Barcelona based Belter label. Acaríciam was written by Carlos Moncada, Félix Lapardi and Óscar Rubio, with Josep Llobell Oliver taking charge of the production. On the B-Side was Machos, which was penned by Pepe Luis Soto and produced Ramón Rodó Sellés. When Acaríciam which was a sensual sounding disco track was success, this resulted in Susana Estrada releasing her debut album, Machos.

Unlike most albums released in 1980, Machos was released by Belter,  but only on cassette. It featured songs from the musical Susana Estrada was appearing in, Machos. Nowadays, the cassette album Machos is a collector’s item, and changes hands for up to £100. However, nowadays, Susana Estrada’s official debut album is regarded as Amor Y Libertad.

When Susana Estrada came to record Amor Y Libertad, it featured ten songs penned by Carlos De Las Heras. They were recorded at the Belter Studio, in Barcelona, with producer by Josep Llobell Oliver. To accompany Susana Estrada, he had brought onboard Atlanta a talented and experienced funk group who were familiar faces on the local music scene. The combination of Susana Estrada, Atlanta and Josep Llobell Oliver resulted in what would eventually be regarded as a Euro Disco  and cosmic disc classic, Amor Y Libertad.

Initially, Amor Y Libertad was underrated and didn’t receive the recognition many thought it deserved. Critics didn’t seem to ‘get’ Amor Y Libertad, despite its innovative fusion of boogie, cosmic disco, funk, Italo Disco, modern soul and the Munich Sound. Maybe critics were shocked by what many regarded as provocative lyrics and sensual vocals? If that was the case, then songs about sexual liberation and freedom were definitely going to get critics hot under the collar. The reception that Amor Y Libertad received was hugely disappointing for everyone involved in the project.

Playing an important part in the sound and success of the album was Atlanta, who were produced a genre-melting, dance-floor friendly backdrop for Susana Estrada. Meanwhile Josep Llobell Oliver produced Amor Y Libertad, and took a less is more approach to production. This worked well and resulted in what eventually became a Euro Disco and cosmic disco cult classic.

After the release of Amor Y Libertad, Susana Estrada released Mi Chico Favorito as a single later in 1981. This was Susana Estrada’s penultimate release during the eighties.

It’s a similar case with Tócame, which was recorded in 2007, and is best described as Hi-Energy meets Euro Disco. This was a long time after Susana Estrada was perceived as one of the most controversial figures in Spanish music.

She was the one time model who went on to enjoy a career as an actress, agony aunt and singer. Susana Estrada also fought for women’s rights, sexual liberation and freedom. Sadly, her campaigning is often overshadowed by parts of her career that caused controversy.  This may not have been the case in America, Britain or other parts of Europe. However, Spain which was a conservative catholic country, which was in a period of transition from a dictatorship to democracy. Many people were unprepared for Susana Estrada, her campaigning and indeed, some of the music Susana Estrada released during her career. That was somewhat ironic.

What Susana Estrada was campaigning for was women’s rights, sexual liberation and freedom, which were things that many women in other parts of Europe, Britain and America took for granted.  Alas, in the newly democratic Spain, Susana Estrada’s campaigns caused controversy in the corridors of power. Maybe Spain’s patriarchy were scared or intimated by a strong and independent woman, who was willing to make a stand for what she believed in? Despite being fined, having her passport cancelled and losing her vote for ten years, Susana Estrada wasn’t going to be silenced. She continued to speak for all the Spanish women who had no way of making their views heard.  One way Susana Estrada was able to make her voice heard was through her music during a career. Nowadays, Susana Estrada is regarded as one of Spain’s Euro Disco divas, and also as a woman who was determined to make a difference for her Spanish women through her relentless campaigning for women’s rights, sexual liberation and freedom.

The Life and Times of Susana Estrada. 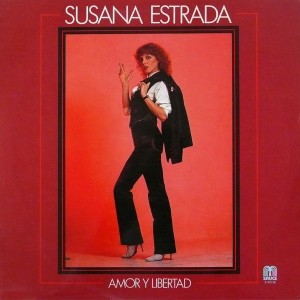