Tenor saxophonist Dexter Gordon was only seventeen  when he joined  Lionel Hampton’s band in 1940, and for the next three years, played alongside Illinois Jacquet and Marshal Royal. However, by 1944 he was a member of the Fletcher Henderson band before featuring in Louis Armstrong and Billy Eckstine bands. Already Dexter Gordon was regarded one of jazz’s rising stars.

In 1945, he featured on recordings by Dizzy Gillespie, and then went on to record under his own name for the Savoy label. This was the start of Dexter Gordon’s long and illustrious recording career.

In late 1946, Dexter Gordon returned home to Los Angeles, the city where he was born on February the ’27th’ 1923 and grew up loving jazz music. He started playing the clarinet when he was thirteen and then switched to the alto saxophone. Then when he was fifteen he began playing the tenor saxophone which he had already made his name playing and would continue to do so.

The following year, 1947, he began recording for Ross Russell’s Dial label, and embarked upon saxophone duels with his friend and fellow tenor saxophonist Wardell Gray. They would become a popular attraction when the pair played live between 1947 and 1952. By then, Dexter Gordon was regarded as one of rising stars of bebop and indeed jazz.

Sadly, Dexter Gordon’s life seemed to spiral out of control during the fifties as heroin addiction took its toll. No longer was he spending as much time in the recording studio nor playing live. Then in 1953, he was sentenced to two years in prison for drugs offences, and when he was released in 1955 Dexter Gordon played on the Stan Levey album, This Time the Drum’s on Me. It was hoped that  this was a new start for the thirty-two year old.

This was the least of his worries though. Over the next four years while Dexter Gordon tried to resume his career, he was in and out of prison. However, when he left Folsom Prison in 1959 it was for the last time.

As the sixties dawned, Dexter Gordon was back living in LA and was determined to get his career back on track. He had beaten his addiction to heroin, but was still on parole from Chino State Penitentiary. That was when time Julian “Cannonball” Adderley reconnected with Dexter Gordon who was appearing in a production of The Connection, a play about the victims of heroin addiction.

The Resurgence Of Dexter Gordon.

Julian “Cannonball” Adderley wanted to try to persuade Dexter Gordon to return to the studio. After some persuasion a session was booked at United Recording Studios, Los Angeles, on the ‘13th’ of October 1960.

That was where The Resurgence Of Dexter Gordon was recorded with Julian “Cannonball” Adderley producing the session. Six complex compositions were recorded that allowed Dexter Gordon to showcase his ability to improvise as he unleashed a series of breathtaking performances that were a reminder of what he was capable of.

When The Resurgence Of Dexter Gordon was released in late 1960 by Jazzland, critics heaped praise on the album from the fallen idol who who was on the comeback trail. It could be regarded as the album that saved Dexter Gordon’s career as he was at the crossroads and could’ve taken a wrong turning. Thankfully he didn’t and in 1961 Dexter Gordon was signed by jazz’s premier label Blue Note Records. Over the next two years he recorded some of the best albums of his career.

On the ‘6th’ of May 1961, Dexter Gordon recorded what would become his debut album for Blue Note Records, Doin’ Alright. Five tracks were recorded at the Van Gelder Studio, in Englewood Cliffs, New Jersey, where all his Blue Note Records’ sessions were recorded with producer Alfred Lion. The band featured twenty-two year old trumpeter Freddie Hubbard who like Dexter Gordon nearly two decades earlier, was regarded as one of jazz’s rising stars. He was part of an all-star band.

They played their part in the sound and success of Doin’ Alright which was released to critical acclaim two months later in August 1961. Dexter Gordon wasn’t just Doin’ Alright his comeback continued apace at jazz’s premier label. 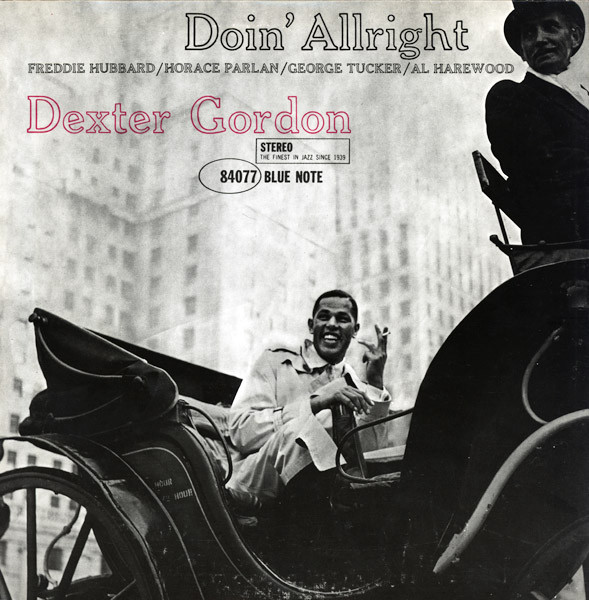 Just three days after recording Doin’ Alright, the comeback king was back in the studio recording Dexter Calling…on the ‘9th’ of May 1961. This time, Dexter Gordon led a quartet which featured none of the musicians that played on his last album. Despite that, this new band played their part in what was one of the finest albums of Dexter Gordon’s career.

Dexter Calling…was released in late January 1962, and featured Soul Sister, I Want More and Ernie’s Tune which were written for the Los Angeles production of Jack Gelber’s 1960 play The Connection. It was vintage Dexter Gordon with the thirty-eight year old tenor saxophonist back to his best on that not only swung, but was full of subtleties and surprises. Dexter Calling…was called an essential album from Dexter Gordon who was making up for lost time.

He recorded seven albums between 1961 and 1964. This included Landslide which was recorded during 1961 and 1962, but wasn’t released until 1980. However, the next two albums Dexter Gordon recorded were classics, Go! and A Swinging Affair.

When Go! was recorded on August the ’27th’ 1962, it was another quartet recording featuring drummer Billy Higgins, bassist Butch Warren and pianist Sonny Clark. They made their way to the Van Gelder Studio, and Rudy Van Gelder recorded the album in what was later described as an informal setting.

This brought out the best in this latest quartet, and from the opening bars of Cheese Cake it was apparent that they had brought their A-game to the studio as the quartet combined hard bop and modal jazz. However, it was Dexter Gordon who plays a starring role as he continues his comeback. He plays with confidence and giving a series of emotive, impassioned and energetic performances. The rest of the band raises their game and when Go! was released in December 1962 it was hailed as his finest album and nowadays, is regarded as a jazz classic. So is the album Dexter Gordon recorded two days later, A Swingin’ Affair which has just been reissued by Blue Note Records.

There was no rest for Dexter Gordon who two days after recording Go!, made the return journey to the Van Gelder Studio, where he and the same quartet were greeted by Rudy Van Gelder and producer Alfred Lion.

This time around, Dexter Gordon was going to record two of his own compositions Soy Califa and McSplivens. Bassist Butch Warren had written The Backbone while the rest of the album were cover versions. They were Billie Holiday and Arthur Herzog Jr’s Don’t Explain, Nacio Herb Brown and Gus Kahn’s You Stepped Out Of A Dream and Until The Real Thing Comes Along. These tracks were recorded by the same quartet that recorded Go!

The quartet featured drummer Billy Higgins, bassist Butch Warren and pianist Sonny Clark and recorded the six tracks during a one day session. Little did they know that they had recorded two classic albums in the space of two days.

Not long after the recording of A Swingin’ Affair, Dexter Gordon left New York and moved to Paris, which was his home for the next fourteen years. He was happier in Paris, which was a much more tolerant company. There wasn’t the same racism that Dexter Gordon had experienced in New York, and he liked that the French people valued jazz musicians.

Despite the success of Go!, Blue Note Records seemed in no hurry to release A Swingin’ Affair. They album lay unreleased for over two years and during that period Dexter Gordon recorded more albums.

This included Our Man In Paris, an album of classics which was released in December 1963 and now is regarded as another classic album from Dexter Gordon. The other album he recorded was One Flight Up on June the ‘2nd’ 1964. It wasn’t released until September 1965, and by then, A Swingin’ Affair had been released.

When A Swingin’ Affair was released in October 1964, it was to widespread critical acclaim. Dexter Gordon was on a roll and critics called the album one of his finest offerings. Nowadays, A Swingin’ Affair is regarded as a classic and a reminder of one of the great tenor saxophonists at the peak of his powers.

A Swingin’ Affair opens with the Afro Cuban tinged Soy Califa, where pianist Sonny Clark and Dexter Gordon play starring roles when the solos come round. In Dexter Gordon’s case he eschew the opportunity to improvise and stays true to the melody as the track swings and then some. Don’t Explain is the first of the three standards on the album. Here, Sonny Clark’s playing is slow and understated, and Dexter Gordon also plays slowly and within himself. What follows is a beautiful and romantic cover of a much-loved standard for lovers, and those who have loved and lost. You Stepped Out Of A Dream is an oft-covered standard which Dexter Gordon’s quartet reinvent. To do this, they invert the melody in the bridge and add Latin rhythms throughout this swinging and memorable cover where Dexter Gordon and pianist Sonny Clark play starring roles.

For many critics, Butch Warren composition The Backbone was the highlight of the album. It’s tailor made for the band and is hard bop albeit with a Bossa nova influence. Not for the first time  pianist Sonny Clark is at the heart of everything that is good. Despite that, Dexter Gordon just manages to outdo him with a solo where he plays with restraint, fluidity and an inventiveness. It Will Have To Do Until The Real Thing Comes Along is a beautiful wistful remake of this standard. Again, the Dexter Gordon and Sonny Clark play starring roles in what’s a heartachingly beautiful cover. McSplivens is bright and breezes along as Dexter Gordon and his quartet ensure that the album closes with what’s definitely a A Swingin’ Affair.

When A Swingin’ Affair was released in October 1964, Dexter Gordon’s comeback was complete and he was enjoying one of the most successful periods of what was a long and successful career. It seemed he could do no wrong during the Blue Note Records’ years and released a string of classic albums. This included the two albums he recorded in two days, Go! and A Swingin’ Affair. On both albums, Dexter Gordon leads a quartet that compliment him perfectly and play their part in the sound and success of two albums that are now regarded as jazz classics. Go! and A Swingin’ Affair are the perfect way to discover Dexter Gordon, one of the greatest tenor saxophonist in the history of jazz, and the comeback king who came back from the brink.