By the time Chicago-born pianist Andrew Hill released his sophomore album Black Fire on Blue Note Records in 1964, he was already thirty-two, and was making up for lost time. He had only started to play the piano when he was thirteen but made rapid progress. Earl Hines    spotted the young pianist’s potential and encouraged him, and so did German composer, conductor, musician and teacher Paul Hindemith who he studied with until 1952. This paid off, and just two years later, Andrew Hill began working as a sideman. It was a rapid rise for someone who only took up the piano eight years earlier.

Andrew Hill was born in Chicago on the ‘30th’ of June 1941, and was brought up by his parents William and Hattie alongside his brother Robert, who was a singer and classical violinist. As a child, the future jazz great attended the University of Chicago Laboratory Schools. However, he didn’t start playing the piano until he was thirteen.

It turned out that he was a natural and his potential was spotted by another Chicago-born jazz pianist Earl Hines.  He encouraged Andrew Hill, which may have changed the course of his career.

He had started out as a boy soprano, singing, playing the accordion and tap dancing. This was all part of an act that Andrew Hill had developed, and between 1943 and 1947 he was a familiar face at talent shows in the Windy City, and won two Thanksgiving parties at the Regal Theatre, which were sponsored by the local newspaper, the Chicago Defender. This was ironic because a few years earlier, he was selling the paper on the city streets. The same paper would later document Andrew Hill’s career.

Before that, Chicago-born composer, arranger and musician Bill Russo met Andrew Hill and referred him to Paul Hindemith. The high respect German composer, conductor, violist and violinist was teaching at Yale and taught Andrew Hill on an informal basis until 1952. By then, his career was well underway.

Andrew Hill had been playing in local R&B bands and alongside touring jazz musicians since he was a teenager. He had already shared the stage with Charlie Parker and Miles Davis, and the future looked bright for the young pianist. However, he was still learning about music.

In 1950, saxophonist Pat Patrick taught Andrew Hill his first blues changes on the piano. This was a revelation for the nineteen year old, who three years later, would make his professional debut.

This was with the Paul Williams’ band and much later, Andrew Hill remembered: ”At that time, I was playing baritone sax as well as piano. However, he settled on the piano which was the instrument he eventually made his name playing.

The following year 1954, Andrew Hill made his recording debut as a sideman. Within a decade he had embarked upon a solo career. That was all in the future.

Over the next few years Andrew Hill worked as a sideman and established a reputation as an up-and-coming pianist. He also met two men who would influence him stylistically, Barry Harris and Joe Segal.

In the late-fifties, Andrew Hill started to work as an accompanist for jazz singer Chicagoan Dinah Washington. Her popularity had soared during the fifties and she was enjoying the most successful period of her career. Working with the Queen of the Blues was a prestigious gig for Andrew Hill who also embarked upon a solo career whilst in her employ.

He signed to Warwick Records which had been established by Morty Craft in New York, in 1959. The new label released everything from rock ’n’ roll by Johnny and The Hurricanes to jazz albums by Pepper Adams, Curtis Fuller, Teddy Charles and Andrew Hill. His debut album was So In Love, a hard bop album which was produced by Fred Mendelsohn and released in 1960. However, the album wasn’t a commercial success and Andrew Hill continued to accompany Dinah Washington.

This he continued to do until 1961. By then, the nomadic life as a sideman and years spent touring had taken their toll, and Andrew Hill was ready to settle down.

He was thirty in 1961, and decided to move to  New York which became his new home. This made sense as the Big Apple was the jazz capital of America and home to many of the top jazz clubs. It was also where he worked with Al Hibbler and Johnny Hartman. Living in New York seemed to suit Andrew Hill. Despite that, he decided to move to Los Angeles.

This came about after he got the chance to work with Roland Kirk’s quartet who were playing at the Lighthouse Café, in Hermosa Beach. However, it wasn’t long before Andrew Hill was heading home having also played on Roland Kirk’s album Domino. It was released in November 1962, and was the second album he had played on that year.

The other was Walt Dickerson’s To My Queen. It was also released in 1962 and was a showcase for Andrew Hill’s piano playing. However, 1963 would be the busiest year of his career.

For part of 1963, Andrew Hill worked as sideman playing on Jimmy Woods’ Conflict and then on Hank Mobley’s No Room For Squares and Joe Henderson’s Our Thing which were released by Blue Note Records. This was the label that Andrew Hill had signed to, and in November 1963 would record his sophomore album.

Three years had passed since the release of So In Love, and Andrew Hill was keen to kickstart his solo career. There was no better place to do so, that at Blue Note Records which was jazz’s premiere label. He would be working with some of the biggest names in jazz as well as recordist Rudy Van Gelder and producer Alfred Lion.

On the ‘8th’ of November 1963, Andrew Hill and his band travelled to the now familiar environs of Van Gelder  Studio, which was situated at 445 Sylvan Avenue, Englewood Cliffs, New Jersey. The band that arrived at the studio wasn’t the one that was meant to record the album. Drummer Philly Joe Jones had to drop out because of scheduling problems and was replaced by Roy Haynes. He was joined by in the rhythm section by bassist Richard Davis who later played on Van Morrison’s classic album Astral Weeks. Completing the lineup were saxophonist Joe Henderson and bandleader Andrew Hill who wrote the seven tracks on Black Fire.

Unlike many Blue Note Records’ albums which were recorded in a day, Black Fire took two days to record. The band made the return journey to New Jersey and recorded the rest of the album ‘9th’ of November 1963. Now Andrew Hill’s Blue Note Records’ debut was ready to release.

When Black Fire was released to critical acclaim in the spring of 1964, it was hailed as a powerful and impressive album that was unique. Here was an album that stood out from the crowd. The music was adventurous and innovative and  borrowed from avant-garde and combined this with hard bop, Afro-Cuban rhythms and modal harmonics. While the music on the album was complex and sometimes challenging it was rewarding and Black Fire was later heralded as a timeless modern jazz classic. Andrew Hill had set the bar high with his Blue Note Records’ debut. How would he follow this up? 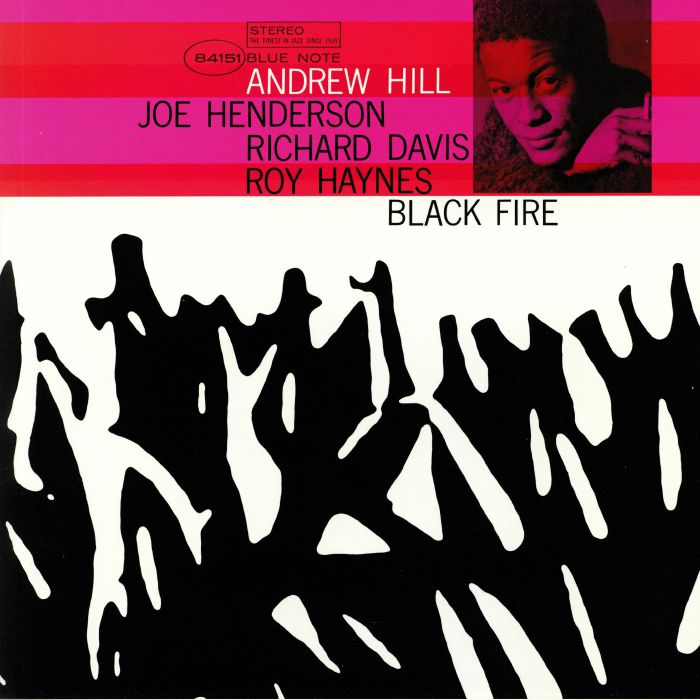 While many record labels would’ve waited until Black Fire has been released before sending Andrew Hill back into the studio, that wasn’t the way Blue Note Records operated. Alfred Lion decided that his new signing should return to the Van Gelder Studio n the ’13th’ of December 1963 and record the followup to Black Fire, Smoke Stack.

Just like Black Fire, Andrew Hill had written the seven tracks that would become Smoke Stack. It was going to be a very different album from Black Fire as it would feature two bassists.

Joining Andrew Hill at Van Gelder Studio were  drummer Roy Haynes and bassists Richard Davis and Eddie Khan. They worked their way through seven compositions and this time, the session lasted just the one day. However, Smoke Stack wasn’t released until August 1966.

By then, Andrew Hill played on Bobby Hutcherson’s 1965 album Dialogue and recorded six more solo albums. He released Judgment! in September 1964, which was followed by Point Of Departure in April 1965. After this, Blue Note Records decided the time was right to release Smoke Stack.

Nearly three years had passed by the time Smoke Stack was released in August 1966 and often, an album can sound dated. That wasn’t the case when it was released to mostly critical acclaim and hailed as a cerebral and innovative album which was a showcase for Andrew Hill’s enviable compositional skills and one of the leading pianists of the early-sixties. However, despite the reviews of Smoke Stack the album failed to match the success of Black Fire. It was the album that got away for Andrew Hill.

Looking back, Smoke Stack found Andrew Hill’s music evolving, and it was quite different to the previous album he had recorded in 1963, Black Fire and featured what were akin to seven impressionistic tone poems. They showcased a talented composer who was confident enough to eschew conventionally structured compositions and encourage spontaneity and allowed his band to improvise and play with freedom and fluidly. This was something that Andrew Hill explored on future albums, especially Point Of Departure.

On Smoke Stack, gone was much of the obvious Afro-Cuban rhythms on what was another  ambitious, adventurous, complex cerebral album of post-bop. It was an album where Andrew Hill was the midpoint between hard bop and free jazz. Having said that, Smoke Stack eschewed much of the looseness and dissonance of free jazz. However, the lengthy and sinuous modal improvisations made it a challenging album for some listeners. Those who understood and embraced  the album found it was a rewarding experience.

That was despite some of the music being dark, broody and ruminative. It was also subdued and sometimes slightly discordant. However, the loose and nebulous song structures of the seven tone poems allowed the quartet to shine.

Andrew Hill came into his own on the angular modernist piano structures, and during the improvised solos his playing borders on provocative. Some critics described his playing insular and cerebral and a few as challenging. However, by 1963 when the album was recorded jazz was evolving and not everyone understood the direction the music was heading or what he was trying to achieve. On Smoke Stack Andrew Hill and his band play with an unbridled freedom and the constantly changing combination of two bassists made it  a unique and innovative album that stood out from the crowd.

Among the album’s highlights are the beautiful, gossamer ballad Verne, which was dedicated to Andrew Hill’s first wife, Laverne Gillette. It’s haunting and poignant. Another highlight is the understated and blues-tinged 30 Pier Avenue. Then there’s Ode To Von which Andrew Hill dedicated to saxophonist Von Freeman. These three tracks are part of what was the most ambitious and innovative album that Andrew Hill had recorded during his career. Incredibly  Smoke Stack was recorded in 1963 and was without doubt an album that was way ahead of its time.

The cerebral Chicagoan bandleader, composer and pianist was an innovator and pioneer and Smoke Stack is an oft-overlooked and underrated album. Partly because it wasn’t as successful as Black Fire and maybe because some critics and record buyers didn’t understand what Andrew Hill was doing or like the direction his music was heading.

That was a great shame given the quality of music on Smoke Stack. It veers between broody and ruminative to beautiful, delicate, expressive, emotive and haunting on what’s an ambitious, innovative and complex album that captivates, challenges and ultimately is rewarding for those who embrace and understand Andrew Hill’s vision on Smoke Stack. 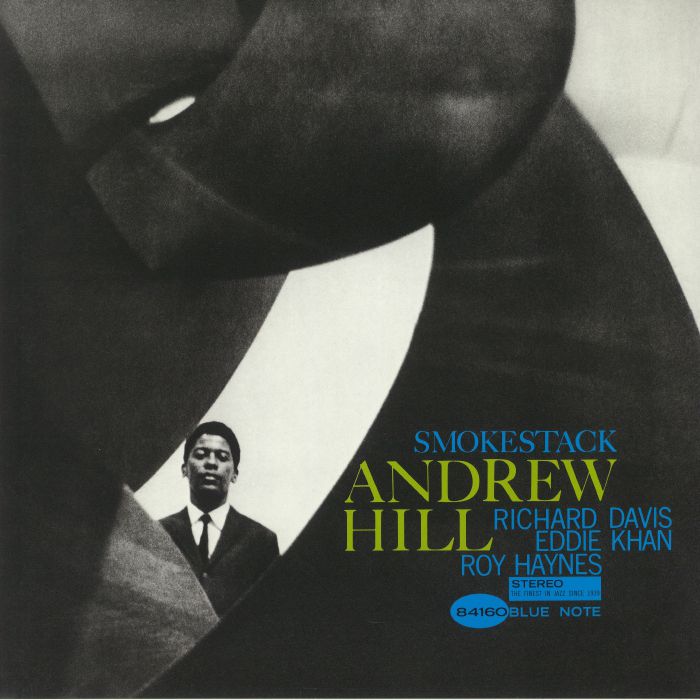