Nowadays, most albums released in 1975 have been reissued at least once. An exception is Funkadelic’s Greatest Hits compilation which was originally released in 1975. That’s about to change when Westbound, an imprint of Ace Records reissues this ten track CD. It’s been newly remastered and is a vast improvement on the thin, tinny sounding original album.  The compilation is known as s “the sheep album” because of Neil Terk’s unique and memorable cover.  It’s the perfect opportunity to discover ten tracks from George Clinton’s groundbreaking group taken from their first six albums which were released between 1970 and 1975.

George Clinton was born in Kannapolis, North Carolina, in 1941, but grew up in New Jersey. That was where he formed the doo wop group The Parliaments in the late fifties.

At the time he co-owned a barber salon in Plainfield and spent much of his day straightening hair. That was about to change when he formed his new group. It featured Ray Davis, Fuzzy Haskins, Calvin Simon, Grady Thomas and George Clinton who became the leader and manager of The Parliaments.

Initially, the group  entertained customers in the barber shop. This was good practice as it allowed the group to hone their sound.

In June 1959, The Parliaments released their debut single Poor Willie. Although it failed to trouble the charts this was the start of career that that spanned twenty-one years.

As the fifties gave way to the sixties, the group had honed a sound that fused elements of soul and funk with increasingly bizarre and surreal lyrics. Initially, this didn’t find favour with record buyers. To complicate matters, The Parliaments were constantly switching between record labels. Still, though, a hit single continued to elude The Parliaments.

In 1964, George Clinton hired Frankie Boyce, Richard Boyce and Langston Booth to back The Parliaments. They were now a quintet which he hoped would result in a change in fortune for the group.

Sadly, it wasn’t to be and two years later, in 1966, Frankie Boyce, Richard Boyce and Langston decided to join the US Army. This left George Clinton looking for three new musicians.

He recruited bassist Billy Bass Nelson and guitarist Eddie Hazel in 1967. Later, he added guitarist Tawl Ross and drummer Tiki Fulwood. This was the lineup of The Parliaments that headed to Detroit.

By 1967, George Clinton was working as a staff songwriter at Motown. He had also arranged and produced numerous singles for other independent labels in Detroit. However, his own group The Parliaments had still to make a breakthrough.

This was about to change when The Parliaments released I Wanna Testify in May 1967, on the Detroit-based label Revilot Records. It reached number twenty on the US Billboard 100 and three on the US R&B charts. At last, The Parliaments had enjoyed a hit single, and it looked as if this was the breakthrough that they had been working towards.

It may well have been the case if Revilot Records had been forced to file for bankruptcy. This resulted in The Parliaments becoming embroiled in a contractual dispute which led to the band losing the rights to the name. For a band that had just enjoyed the biggest hit of their career, this was a disaster.

What The Parliaments needed a new name. That was when Billy Bass Nelson came up with the name Funkadelic. It stuck and the group adopted the new name.

This allowed the newly named Funkadelic to continue to record for other labels, and in 1968 they signed to Westbound Records.

Having signed to Westbound Records, Funkadelic’s music began to evolve. Doo-wop was yesterday’s sound. The newly named group needed a new and much more contemporary sound. Psychedelia, rock, soul and funk were the musical flavours of the month. So were Jimi Hendrix and Sly Stone and it made sense for Funkadelic to fuse these musical genres and influences.

By then, George Clinton had decided that Funkadelic would be a funk-rock band which featured five backing musicians and The Parliaments as uncredited guest artists. This would be the lineup of Funkadelic that featured on their eponymous debut album which was released on Westbound Records.

Funkadelic was released to plaudits and praise on ‘24th’ February 1970, and was a truly ambitious genre-melting debut album of P-Funk. The group fused blues-tinged acid rock,  lysergic space funk and conventional soul songs whose sound hinted at Stax and even Motown influences. This included I’ll Bet You and  Got a Thing, You Got a Thing, Everybody’s Got a Thing which are among the highlights of a truly innovative and imaginative debut album that showcased what George Clinton and the group were capable of.  It was no surprise that these two tracks featured on Funkadelic’s Great Hits’ album in 1975.

When Funkadelic reached 126 in the US Billboard 200 and eight in the US R&B Charts the future looked bright for the psychedelic, funkateers. They would release their sophomore album later in 1970. 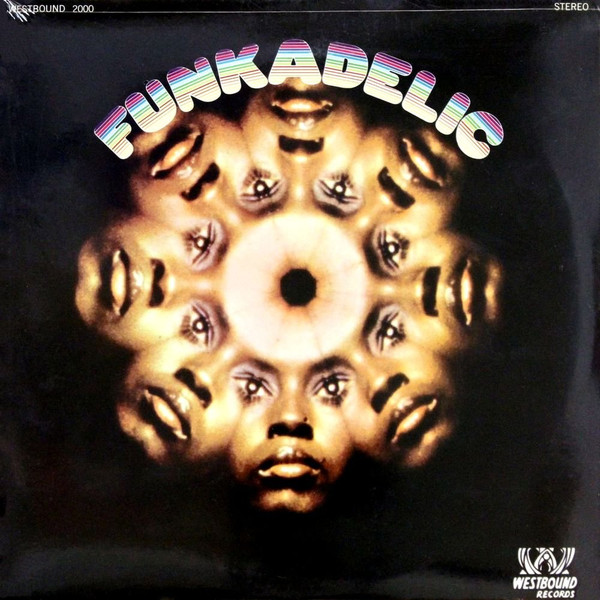 George Clinton have a brainwave when recording of Funkadelic’s album was due to too place. He decided to record an album of P-Funk whilst they were tripping on acid. This was a first and the result was the future funk classic Free Your Mind… and Your Ass Will Follow.

It was album was mired in controversy. This was down to the title-track. It was a ten minute epic where amidst a feedback drenched backdrop, Funkadelic managed to offend Christians everywhere. The result was mixed reviews.

Despite that, the album reached number ninety-two in the US Billboard 200 and number eleven in the US R&B charts. This made Free Your Mind… and Your Ass Will Follow the most successful album of Funkadelic’s career. That’s no surprise.

Funk, psychedelic soul and acid rock were combined into a majestic musical potpourri on an album of P-Funk packed full of highlights. This included Funky Dollar Bill and I Wanna Know If It’s Good to You? Both tracks later featured on Funkadelic’s  Greatest Hits album in 1975. By then, they had released four more albums.

This included Maggot Brain which was recorded during 1970 and 1971. By then, the group had a s voracious appetite for drugs, and specifically, acid. What would become a classic album, cost not just Funkadelic, but the individual members dearly.

On its release, on 12th July 1971, Maggot Brain was well received by critics. Most critics gave the album glowing reviews. The album featured genre-melting music where acid rock, funk rock, psychedelic soul funk and progressive soul melted into one on their third album of P-Funk  With tracks of the standard of Can You Get To That and Hit It and Quit It, it which also featured on Funkadelic’s Greatest Hits in 1975. That was still to come.

Before that, most critics thought that Maggot Brain would  become a classic and a comically successful album.

Sadly, that wasn’t the case. Music buyers weren’t convinced by Funkadelic’s dark, moody worldview. Maggot Brain stalled at 108 in the US Billboard 200 and number fourteen in the US R&B charts. For George Clinton this was a huge disappointment. Worse was to come.

Funkadelic returned on May 22nd 1972 with their fourth album America Eats Its Young. It was a double album and featured a new lineup of the group.

With the new lineup came a new sound. It was radical mixture of funk, fusion, psychedelia, P-funk and rock that was combined with insightful powerful lyrics full of social comment on an  album that was hailed as George Clinton’s  “grand statement” on the ongoing Vietnam War. Elsewhere, some of the tracks were tinged with humour and playful as Funkadelic showed different sides to their music.

However, some critics felt that some of the material on America Eats Its Young wasn’t strong enough and it would’ve been better as a single album. The same can be said of The Beatles’ White Album. Nowadays, though, America Eats Its Young is regarded as one Funkadelic’s finest and most eclectic albums. One of the standout tracks is Loose Booty which was released as a single and features o Funkadelic’s Greatest Hits album in 1975. 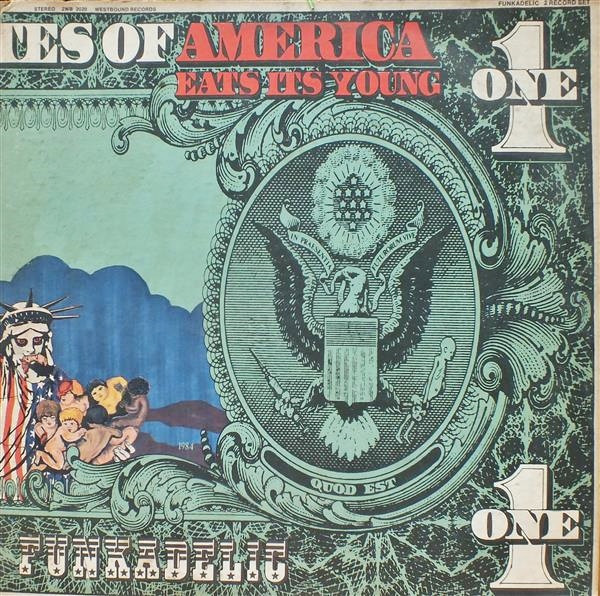 It was a case of expect the unexpected from George Clinton and his fellow musical shapeshifters. They released Cosmic Slop in May 1973, and it was an album very different to their previous releases.

Everything from funk and rock were combined with elements  of hard rock and what can only be described as proto-heavy metal. The finest track on their latest album of P-Funk was Cosmic Sloop,  a glorious genre-melting track that finds a band pushing boundaries to the limits. It’s no surprise the track  featured on Funkadelic’s 1975 Greatest Hits album.

It gave critics and music fans the opportunity the revaluate the track. When the album Cosmic Sloop was released it passed critics it reached 112 on the US Billboard 200 and t twenty-one on the US R&B charts and surpassed the success of America Eats Its Young. Could Funkadelic continue to make progress and introduce their music to a wider audience? 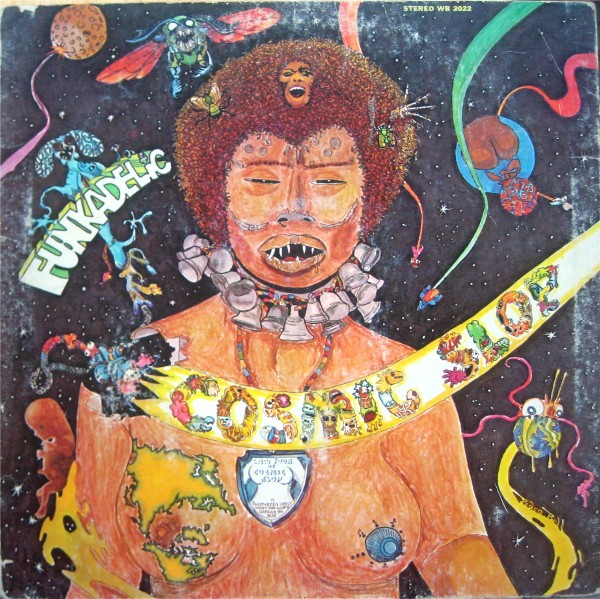 Standing On The Verge Of Getting It On.

For Funkadelic’s sixth album Standing On The Verge Of Getting It On, virtuoso guitarist Eddie Hazel made a welcome return to the P-Funk pioneers. He cowrote each of the seven tracks, shared lead vocal duties and added his distinctive guitar sound. The result was an album that saw the group’s fortunes improve.

This time, critics were won over by an album where the music and jamming and music was the order of the day. Unlike previous albums, the lyrics although good, were overshadowed by Funkadelic and especially a guitar masterclass from Eddie Hazel. This includes on the track Standing On The Verge Of Getting It On which in 1975, reappeared on Funkadelic’s Greatest Hits compilation.

However, when Standing On The Verge Of Getting It On was released on July 14th 1974, it reached 163 in the US Billboard 200 and thirteen on the US R&B charts. This was a disappointment after the success of Cosmic Sloop. The big question was what next for Funkadelic?

Let’s Take It To The Stage.

On ‘21st’ April 1975, Funkadelic returned with their seventh album Let’s Take It To The Stage. It was an album where funk rock, jazz, soul and what was called street rap. Although dark in parts and tough, it featured a tight group making dancefloor friendly music.  There was also an element of humour on an album that was well received by many critics and regarded by some as their most engaging an listenable. However, one criticism was that the subject matter of some of the lyrics weren’t particularly PC.

When Let’s Take It To The Stage was released the album reached 104 in  the US Billboard 200 and thirteen on the US R&B charts. This was an improvement on Standing On The Verge Of Getting It On. Funkadelic were making progress and a new compilation was released later in 1975.

Westbound released Funkadelic’s Greatest Hits’ album later in 1975, amd it featured ten tracks. They were a mixture of singles, albums and an edit of the instrumental A Joyful Process. It’s a welcome addition, and is part fo what’s a perfect introduction to the groundbreaking and genre-defying music of George Clinton’s P-Funk pioneers.

For anyone yet to discover the music of Funkadelic, then the newly remastered reissue of  Funkadelic’s Greatest Hits is the perfect place to start. Listen to their cosmic mix of musical genres and influences which often featured insightful lyrics full of social comment. Other times, humour was the order of the day. When things got lysergic, the lyrics can be surreal and spacey. However, when Funkadelic unleash a genre-melting jam it’s a case of sit back and enjoy the musical journey. That’s the case on their Greatest Hits album which is a heady and  musical brew to savour time and again.