The C. J. & Co story began in Detroit, Michigan, in the mid-sixties when they were known  as The Strides. By the early seventies,  The Strides featured Curtis Durden and his wife Connie, Cornelius Brown Jr and Joni Tolbert. This was the lineup that signed to the Sussex record label, where they were they first encountered the production team of Mike Theodore and Dennis Coffey who produced them as C.C. & Co.  However,  by then, all wasn’t well at Sussex, and the label was soon no more. Fortunately, Westbound boughtC.C. & Co’s recording contract.

In their early days at Westbound, C.C. & Co worked on soulful songs with Mike Theodore and Dennis Coffey including the club hit Let Them Talk. However, with the arrival of disco C.C. & Co decided to change direction.

One of C.C. & Co’s earliest disco singles was Devil’s Gun which was  written by the British songwriting team of Barry Green, Ronald Roker and Gerry Shury. It was the single that changed C.C. & Co’s fortunes when it reached number thirty-six on the US Billboard 100 and two in the US R&B charts. Meanwhile, across the Atlantic in the UK, Devil’s Gun reached forty-three and gave C.C. & Co their first British hit single.

Despite the success of Devil’s Gun, this wasn’t the original version of the song. It only came to light a couple of years ago, when Mike Theodore told Ace Records about the existence of some unreleased tapes by C.J. & Co which he had recorded when they were signed to Westbound. His next question was would Ace Records be interested?

They already had some unissued tracks by C.J. & Co ut not enough for a new compilation. Maybe the unreleased tracks were the answer to their problems? That turned out to be the case, and the previously unreleased tracks became part of Ain’t It Amazing-The Unreleased Westbound Masters, which has just been released via Ace Records’ Westbound imprint. It’s a reminder of C.J. & Co who were active between 1977 and 1978.

Buoyed by the success of Devil’s Gun, C.J. & Co released We Got Our Own Thing which reached number ninety-three in the US R&B charts and number one in the US Dance charts in 1977. This led to C.J. & Co recording their first album with Mike Theodore and Dennis Coffey.

This was Devil’s Gun, which was released to plaudits and praise in 1977, and reached number sixty in the US Billboard 200 and number twelve in the US R&B charts. Surely the C.J. & Co success story would continue?

When C.J. & Co released their third single Sure Can’t Go To The Moon in 1977. It failed to trouble the charts.

Neither did C.J. & Co’s sophomore album  Deadeye Dick, which made no impression on the charts. It was a similar case with the singles Big City Sidewalk and Deadeye Dick. After just two hit singles and hit album C.J. & Co’s popularity dwindled and they released no more music. However, there was still unreleased tracks in the Westbound vaults. They feature on Ain’t It Amazing-The Unreleased Westbound Masters.

This includes some of the earliest recordings C.J. & Co made for Westbound, including Ain’t It Amazing sure fire dancefloor filler with mesmeric vocal interplay. Rainbow Music and The Golden Touch were both quality dance tracks that had the potential to entice even the most reluctant dancers onto the floor. Quite different is Get Lucky, where the addition of an electronic bass line make it sound like  Giorgio Moroder production when he was working with Donna Summer. However,the previously unheard original mix of their biggest hit Devil’s Gun is the highlight of Ain’t It Amazing-The Unreleased Westbound Masters and sounds as if its been influenced by Norman Whitfield’s productions for Undisputed Truth.

Ain’t It Amazing-The Unreleased Westbound Masters features a dozen soulful disco tracks that were never released by Westbound. The demise of disco meant that further albums by C.J. & Co were  released by Westbound. Now forty years after C.J. & Co released their swan-sing Ain’t It Amazing-The Unreleased Westbound Masters has just been released and is a welcome reminder of their vocal prowess and the production skills of Mike Theodore and Dennis Coffey. 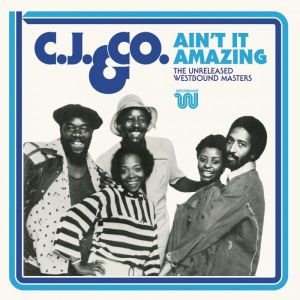