On April 8, 1990, the first series of Twin Peaks, which was created by David Lynch and Mark Frost, made its debut on ABC, and quickly, gained a cult following. Viewers in Britain and America were captivated by what was a landmark series that nowadays, is regarded as one of the greatest and most memorable programs in television history. It was set in the Pacific North-West  which  provided the perfect atmospheric backdrop for the series.

Meanwhile, iviewers in Britain wondered where a British version of Twin Peaks would be filmed? Some speculated that it would be somewhere in the North-West of England, which had a similar climate and landscape to Pacific north west. This included Tim Burgess, who grew up in Northwich, in Cheshire, supporting Witton Albion FC. That was where he met Bob Stanley, who shared Tim Burgess’ love of football, music,  Twin Peaks and cafes.

It was nearly thirty years ago when Tim Burgess met Bob Stanley, who back then, was writing about the new Manchester bands for now defunct Melody Maker. He had  moved from Croydon to Manchester. This came as no surprise to people who knew him. As

a teenager Bob Stanley was fascinated by British New Wave cinema  and novels penned by Alan Sillitoe, Barry Hines, Keith Waterhouse and Stan Barstow. The films were usually shot in the North of England, which was where the books were based  in the sixties.  It later became his home and where Tim met Bob.

They shared much in common from old vinyl, the music being released by Factory Records, football and Twin Peaks which the pair believed was the finest television series ever made. The two men also share a love of cafes, although Tim Burgess has taken it a bit further than  Bob Stanley.

Tim Burgess founded the Tim Peaks Diner, which during the summer moves between festival and combines tea, coffee and music. Tim Peaks Diner is a familiar sight and favourite of many festival goers. They will be pleased to see and hear Tim Burgess and Bob Stanley Present Tim Peaks-Songs For A Late-Night Diner which has just been released by Ace Records. It’s described as a soundtrack for the Tim Peaks Diner at dusk.

The twenty tracks on the compilation feature bands and artists from the North of England and Wales. This includes Young Marble Giants who contribute Choci Loni a track from their 1980 Colossal Youth album. It’s moody and minimalist and is the perfect way to open Tim Burgess and Bob Stanley Present Tim Peaks-Songs For A Late-Night Diner.

Dreamy and ethereal describes Lips That Would Kiss (Form Prayers To Broken Stone) by the Durutti Column. It’s another track from 1980, and showcases the talents of Vini Reilly one of the unsung heroes of British music. Every self-respecting record collection must have a Durutti Column album.

Breathtakingly beautiful describes the cinematic sounding Hunros (A Dream) from Gwenno’s 2018 album Le Kov. It’s a hidden gem that is well worth discovering.

I Love You (Restrained In A Moment) by The Royal Family and The Poor is a track from their 1984 album The Project Phase 1: The Temple Of The 13th Tribe. It’s a soul-baring ballad with a hint if psychedelia from a band that should’ve sadly, didn’t enjoy the success they deserved.

One of the biggest names on the complain are Echo and The Bunnymen, who contribute the dark and lysergic sounding Fuel which was released in 1982.

Gnac released The Broken Fall as a single in 1996. It also featured in Omnibus, a film about David Hockney. This slow, spacious and thoughtful sounding track is a welcome addition to Tim Burgess and Bob Stanley Present Tim Peaks-Songs For A Late-Night Diner.

Dog is a  genre-melting track from El Perro Del Mar’s 2008 eponymous album. It finds Sara Assbring combining elements of chamber pop, dream pop, library music and sixties girl groups. The result is a beautiful, dreamy and ethereal sounding track that deserves to be heard by a wider audience.

Forty years ago in 1979, Una Baines and Martin Bramah left The Fall, and founded Blue Orchids. The original group only released a handful of singles and the album The Greatest Hit (Money Mountain). It featured A Year With No Head, which is melodic and memorable a Blue Orchidds paints pictures on what was one their finest offerings.

Closing  Tim Burgess and Bob Stanley Present Tim Peaks-Songs For A Late-Night Diner is Sky Burial by Dean McPhee. It’s a hesitant, wistful and ponderous track which features a crystalline guitar. Echo and delay is deployed effectively to create a cinematic sounding track that is sure to be a favourite on the juke box at Tim Peaks.

The twenty tracks on the Tim Burgess and Bob Stanley Present Tim Peaks-Songs For A Late-Night Diner, which is a carefully curated compilation which features a mixture of familiar faces and hidden gems from truly talented artists and bands. They’re part of what’s the perfect soundtrack to the Tim Peaks Diner at dusk. The music is variously atmospheric, cinematic, dark, ethereal, hesitant, lysergic,  ponderous and wistful. It’s also beautiful and thought-provoking  and paints pictures in the mind’s eye as the listener is transported to the Tim Peaks Diner. It would be home to a cast of colourful  and mysterious characters just like its American counterpart in 1990. However,the  Tim Peaks Diner is situated somewhere in the North of England not the Pacific North-West.

During the summer, the  Tim Peaks Diner  is a familiar sight at many festivals across the UK. It’s a favorite place for many festival goers who enjoy the tea or coffee and an eclectic selection of music. This includes the music on Tim Burgess and Bob Stanley Present Tim Peaks-Songs For A Late-Night Diner which has just been released by Ace Records and is a captivating collection of eclectic and cinematic music. 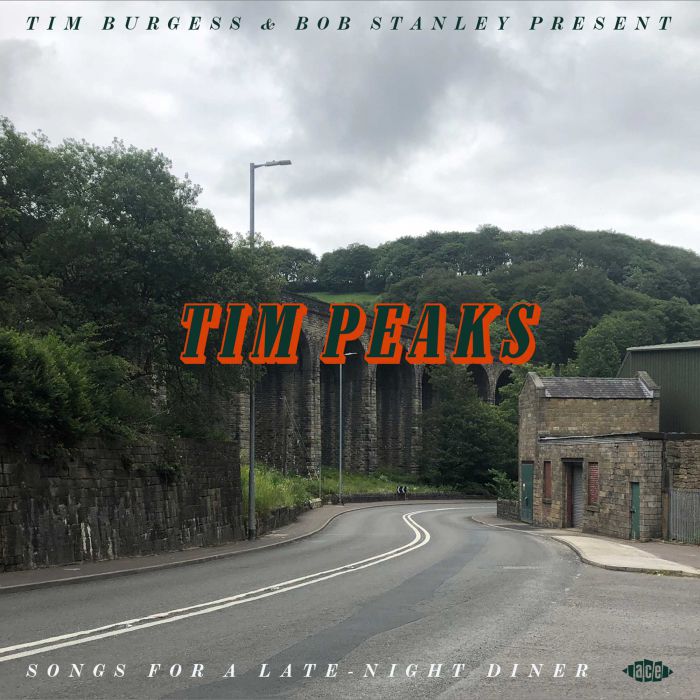