LOCOMOTIVE-WE ARE EVERYTHING YOU SEE.

Locomotive-We Are Everything You See.

By 1965, all over Britain, new groups were being founded every day. They had watched as The Beatles and the rest of the British Invasion groups took America by storm. The new groups watched enviously, hoping and dreaming that one day soon, they would be signed by a record label.

For many of these groups, they would’ve been happy to release even one single. It would be something to show the grandchildren in the future.

Others groups however, wanted more than that. While they recognised the importance of singles, they wanted to make a statement musically, and the only way to do that was by releasing an album. They could also explore and fuse different musical genres and experiment musically. Birmingham-based Locomotive did all this on their 1970 debut album We Are Everything You See, which was recently released on vinyl by Magic Box. However, the story begins five years earlier in 1965.

That was when the group the Kansas City Seven was founded in Birmingham, England, by trumpeter Jim Simpson and singer Danny King, drummer Mike Kellie, bassist Pete Allen, organist Richard Storey and saxophonists Chris Wood and Brian “Monk” Finch. They had all been members of other local bands before joining forces in the Kansas City Seven.

Initially, the new group played a variety of music including jazz. However, when they started to play more R&B and soul and less jazz, they changed their name to The Locomotive. That was when the group started to gain a reputation for their live performances. However, as is often the case with new bands, The Locomotive’s started to change.

By the end of 1966, Chris Wood had left to join Steve Winwood, Dave Mason and Jim Capaldi in Traffic.  Danny King, Mike Kellie, Pete Allen, Richard Storey and Brian “Monk” Finch all left The Locomotive. Jim Simpson was the only original member of the group.

During this period, new arrivals included drummer “Mooney” Mezzone,  bassist Jo Ellis, keyboardist Norman Haines and saxophonist Bill Madge. The arrival of Norman Haines was particularly important to the development of  The Locomotive.

Norman Haines had worked in a record shop in Smethwick, a district of Birmingham, where he developed an interest in ska.

He also filled the void after vocalist Danny King’s departure from the group. For The Locomotive this was the start of a new era.

By 1967, The Locomotive had signed to the Direction label and had recorded their debut single Broken Heart, which was written by Norman Haines. Tucked away on the B-Side was a cover of Dandy Livingstone’s Rudy-A Message To You  which twelve years later in 1979, gave The Specials a hit single. That was still to come.

Before that, Broken Heart was released by The Locomotive and their debut single gave them a hit single in 1967. This could’ve launched the group’s career.

In 1968, Jim Simpson left the group and became The Locomotive’s manager. He also setup a new record label Big Bear Records. This wasn’t the end of the changes in changes in lineup.

Bassist Jo Ellis was replaced by Mick Hincks, while drummer “Mooney” Mezzone left and his replacement was Bob Lamb. The final change in personnel was the addition of Mick Taylor who replaced Jim Simpson who was now The Locomotive’s manager.

It was also at this time that The Locomotive decided to shorten their name to Locomotive.  They also signed to Parlophone Records, and it was full steam ahead for Locomotive.

Their sophomore single was another Norman Haines composition, Rudi’s In Love. When it was released in late 1968, it reached twenty-five in the UK charts and gave the group another hit single. Executives at Parlophone Records wanted to build on the momentum, and work began on Locomotive’s debut album.

The majority of the album was written by the band. Mick Hincks penned Rain, Mick Taylor wrote Now Is The EndThe End Is When and Overture was written by Nigel Phillips who cowrote Nobody Asked You To Come, A Day In Shining Armour and The Loves Of Augustus Abbey-Parts One, Two and Three with Norman Haines. He also contributed Mr. Armageddon, Lay Me Down Gently, You Must Be Joking and Times Of Light And Darkness. They were joined by covers of the United States Of America’s Coming Down and Love Song For The Dead Che on what would eventually become We Are Everything You See.

By the time recording took place at Abbey Road Studios, with producer Gus Dudgeon, Locomotive had changed direction musically and were playing progressive rock. This was based around Norman Haines’ keyboard skills. We Are Everything You See was going to be a very different album than their first two singles.

As the recording began,  Locomotive’s lineup featured drummer and percussionist Bob Lamb, bassist Mick Hincks who added backing vocalist and sang the lead on Rain. Norman Haines took charge of the rest of the lead vocals and played harpsichord, mellotron, organ and piano. Horns came courtesy of trumpeters Mick Taylor and Henry Lowther plus tenor saxophonists Bill Madge, Chris Mercer, Dick Heckstall-Smith and Lyn Dobson plus trumpeter Henry Lowther. While the completed album saw Locomotive move in the direction of progressive rock, there were also elements of progressive folk, psychedelia, soul and a good deal of jazz,  especially the changes in tempo. Executives at Parlophone Records were in for a surprise when they heard We Are Everything You See.

That’s the case from the album opener Overture, a cinematic and symphonic sounding track that is a tantalising taste of what’s to come. This includes the dramatic sounding  Mr. Armageddon. The drama comes courtesy of the vocal, washes of organ and sweeping, swirling string. Horns add to to the drama in We Are Everything You See, a lysergic, progressive rock track where effects are used effectively by Locomotive and producer Gus Dudgeon. Then Lay Me Down finds Locomotive seamlessly switching between rock and jazz, while there’s a progressive folk sound to Nobody Asked You To Come. Closing side one is You Must Be Joking, a carefully crafted, melodic and memorable genre-melting track which is one of the highlights of the album.

Elements of progressive rock,  jazz and even R&B can be heard on A Day In Shining Armour, where Locomotive showcase their versatility and ability to switch between and fuse disparate genres. This they continue to do on The Loves of Augustus Abbey, Parts 1-3 which features on side two. Unlike other similar suites, it’s broken up by other tracks including the wistful and ruminative sounding Rain which features Mick Hincks only lead vocal. There’s also a “suite” of United States Of America’s Coming Down and Love Song For The Dead Che which later featured on several progressive compilations. Closing the album was the lysergic and anthemic rocker Times Of Light and Darkness which closes this hidden gem of an album on a high.

It was a very different album to the one executives at Parlophone Records expected. So much so, that when they heard it, they decided to delay the release of the album. This was a huge disappointment for the group.

It also caused a great deal of uncertainty and Parlophone Records decided that Locomotive should record a cover of Question Mark and the Mysterians’ I’m Never Gonna Let You Go. When it was released later in 1969, i sunk without trace. Things then went from bad to worse.

Keyboardist Norman Haines left the group later in 1969. He was then asked to join Black Sabbath, but turned down the chance and formed the Norman Haines Band. This wasn’t his best decision, and Locomotive had lost one of its creative forces.

Later in 1969, Mr. Armageddan was released as the lead single from We Are Everything You See. However, just like Locomotive’s previous single it failed to trouble the charts.  This didn’t augur well for the release of their debut album.

As the seventies dawned, We Are Everything You See was belatedly released in early 1970. While the album was well received by critics who appreciated Locomotive’s new and more sophisticated sound, their fans weren’t won over by it. They preferred the group’s previous R&B sound and the album failed commercially.  For Locomotive this was another disaster and spelt the end of the line for that lineup of the group.

After the release of We Are Everything You See most of the group left. Only Mick Hincks and Bob Lamb remained and tried to continue Locomotive with two new members John Caswell and Keith Millar. The new lineup released one more single a Locomotive,  Roll Over Mary.

Later in 1970, Locomotive was no more, after group as renamed as The Dog That Bit People. The new band released their eponymous debut album in 1971, but spilt up later that year.

It’s not just an album of progressive rock. We Are Everything You See also features  elements of progressive folk, psychedelia, R&B, soul and jazz. Throughout the album  Locomotive switch between and fuse disparate genres and seamlessly change tempo on an album where the vocals are impassioned, emotive and sometimes sound almost tormented. It’s a captivating album and a reminder of one of the great lost British groups of the late-sixties and early seventies. Sadly, their star only was shining brightly for only a short period of time. We Are Everything You See is a reminder of Locomotive, a tight, talented and versatile band whose music on what was an album of ambitious, imaginative and innovative music that features a band at the peak of their powers when their star was shining at its brightest.

Locomotive-We Are Everything You See. 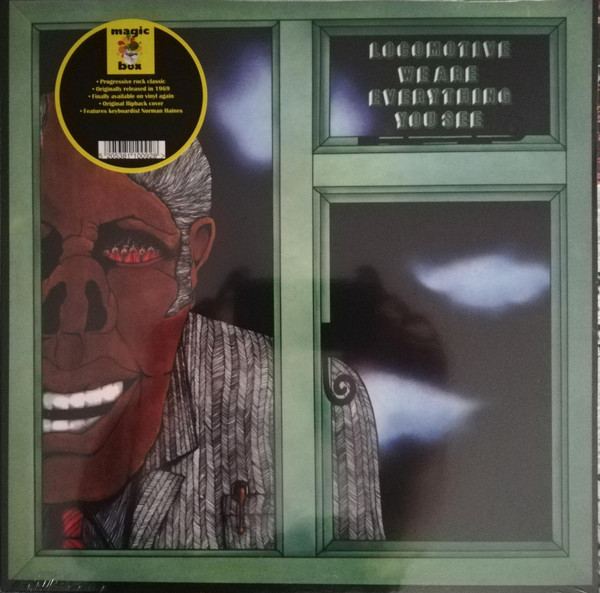