By 1967, Detroit’s eclectic music scene was thriving and new bands were being formed almost daily. Some never got beyond practising in a garage, while others graduated to playing in local bars and clubs which was where they were spotted by A&R reps for local indie labels.

Once signed, they released a single which in many cases, sunk without trace. For other bands, the single they released was a stepping stone to bigger and better things.

That was the case with The Third Power who released We, You, I on Baron Records in 1968. By 1969, they had been signed by Vanguard Records which was primarily a folk label, which had started releasing psychedelic rock. A year later in 1970, The Third Power released their debut album Believe. The album wasn’t a commercial success and The Third Power split-up after the release of Believe. Theirs is a case of what might have been? Would things have been different if they had signed to a different label? Instead, the group were only together three years.

The story begins in Detroit in 1967, when drummer Jim Craig, bassist and vocalist Jem Targal and guitarist and vocalist Drew Abbott formed The Blewsies. They moved into a rented farmhouse which became their base as they honed their sound. It wasn’t long before the group was ready to play on the local live circuit.

For the next year, The Blewsies were a familiar face on the local rock clubs  where it soon became apparent that they were a cut above the competition. This was because of the interplay between the three band members who were soon attracting the attention of a local record company.

This was a local indie label Baron Records. By then, The Blewsies had changed their name and were now known as The Third Power.

They entered the studio in 1968 to record their debut single We, You, I, which featured Snow on the B-Side. When it was released later in 1968 the single sold well in Detroit. This was encouraging for a band who had only been formed a year ago.

After the release of their debut single, The Third Power returned to the live circuit and were supporting a number of bands including local heroes MC5 at the Grande Ballroom. This was all good experience for a band who were about to go up in the world.

By 1969, Vanguard Records which was primarily a folk label, was also signing psychedelic groups. They had already signed The Frost who were from Michigan. When Vanguard Records’ A&R rep heard The Third Power they offered them a recording contract.

This was the opportunity to sign with a prestigious and reputable label. However, one wonders if The Third Power stopped to think was Vanguard Records the right label for them? The label had made its name releasing folk music, and hadn’t much experience with psychedelic music. Would the label know how to market the group and their album? And who was going to produce the album? These were all questions The Third Power should’ve asked executives at Vanguard Records.

When The Third Power entered the studio, they were a progressive power trio whose music incorporated  psychedelia, hard rock, blues, funk rock and the influence of Cream, Jimi Hendrix, Led Zeppelin and Moby Grape. They had written nine songs which they would record with Vanguard Records’ Sam Charters who was producing the session.

Jem Targal was the group’s songwriter-in-chief and penned Feel So Lonely, Passed By, Lost In A Daydream, Comin’ Home and Crystalline Chandelier. He cowrote Gettin’ Together and Won’t Beg Any More with Drew Abbott who wrote Persecution. Like Me Love Me was written by The Third Power and closed the album.

The members of The Third Power kick out the jams on the album opener Gettin’ Together. Searing, scorching guitars combine with the tight rhythm section and Jem Targal’s powerhouse of a vocal. Meanwhile, distortion is part of their armoury as they grab the listener’s attention from the get-go on this hard rocking track.

Feel So Lonely is quite different to the album opener and sounds as if it’s been inspired by Crossroads’ from Cream’s Wheels Of Fire album. Especially the meandering   rhythm and a blistering, wailing guitar solo. It comes courtesy of Jem Targal who delivers an impassioned against the hard rocking and psychedelic backdrop.

Very Different is Passed By a beautiful ballad where Jem Targal’s wistful vocal is accompanied by an arrangement features a twelve-string acoustic guitar, piano and tambourine. It’s the perfect accompaniment one of the highlights of the Believe and shows another side to The Third Power.

Lost In A Daydream is the equivalent to time travel and takes the listener back to the late-sixties, early seventies. The arrangement gallops along and seems to have been inspired by Moby Grape. It’s dreamy, languid  and lysergic and is the perfect track to listen to as you while away a lazy day.

After a hesitant start The Third Power kick loose on Persecution and quickly go from 0-60 mph. Frontman Drew Abbot struts and swaggers his through this hard rocking track. His bass helps drives the arrangement along as Jim Craig powers and pounds his way around his double kit. Meanwhile, Jem Targal sprays searing, scorching and machine gun guitar licks. The interplay between the three band members plays an important part in the sound and success of this hard rocking track full of social comment that apparently, was a favourite at Detroit’s Grande Ballroom.

Straight away, the influence of Led Zeppelin can be heard on Comin’ Home. Especially the drums and guitar parts. Elsewhere there’s a nod to Cream and this is noticeable on Jem Targal’s vocal and the harmonies. It’s a melodic and memorable track this is reminder of what The Third Power were capable of.

They drop the tempo on Won’t Beg Anymore which starts life as a soul-baring psych ballad. That is the case until 2:28 when chatter can be heard in the distance. Meanwhile, the tempo increases and Jem Targa’s chiming guitar takes centrestage. Then the arrangement slows down before becoming rocky and dramatic. Still the vocal is still full of emotive and impassioned on this powerful and poignant track.

One of the most beautiful tracks on Believe is  Crystalline. Chandelier It finds The Third Power combine everything from a rolling bass, baroque harmonies, wind-chimes and a heartfelt, tender vocal on a truly timeless track that should be a favourite amongst compilers of psychedelic compilations.

Closing Believe is Like Me Love Me which was written by the band. It’s another hard rocking track and is the perfect showcase for this tight and talented power trio. They close their debut album with this melodic example of riff rock. It bookends Believe and The Third Power take their bow.

Sadly, when Believe was released in 1970, the album wasn’t a commercial success. It sold reasonably well in Detroit where The Third Power had a following. However, elsewhere the album sank without trace. It was a disaster for The Third Power. Worse was still to come.

When The Third Power returned home to Detroit, they supported the MC5, Bob Seger and various high-profile acts who played at the Grande Ballroom.

Not long after the release of Believe, Vanguard Records announced that they were dropping The Third Power. Their reason was that they were “too heavy.”That seems strange as they must have known what type of group they were signing?

Even before they signed to Vanguard Records, The Third Power’s music was a mixture of hard rock, psychedelia, blues, funk-rock. They were a progressive power trio who Vanguard Records had been keen to sign as they were branching out and signing psychedelic rock bands. This was very different to the folk music that the label made its name releasing. Maybe that was the problem?

It may have been that Vanguard Records didn’t know how to position and market The Third Power? If they had been signed to a different label Believe may have found the wider audience it deserved and things would have been very different for The Third Power.

Not long after the release of Believe, The Third Power split-up. They had released just one single and one album, Believe. Their story is a case of what might have been. The Third Power were talented songwriters and musicians  who technically were streets ahead of many similar bands who were releasing albums in 1970. Sadly, talent only gets a band so far.

That was the case with The Third Power. Sadly, they were only together for three year, but released what is regarded as “one of the finest psychedelic hard rock albums of its era.” Rather belatedly, record collectors have discovered the hard rocking and lysergic delights of The Third Power’s cult classic Believe which could’ve and should’ve launched the Detroit-based progressive power trio’s career in 1970. 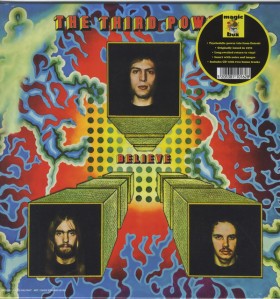